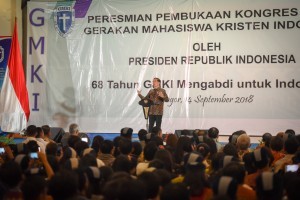 Indonesia is a big country and its people shall always be united, according to President Joko “Jokowi” Widodo in his remarks during the opening of the 36th Congress of the Indonesian Christian Students Movement (GMKI) in Bogor, West Java, Friday (9/14).

“Indonesia is a very big country. If you go from the west part of the country to the east, from the north to the south, you will know that this country is a big country,” President Jokowi said, adding that he has flown from Banda Aceh directly to Wamena in Papua, taking 9 hours 15 minutes.

The President went on to say that Indonesia is blessed with different customs, traditions, religions and regional languages, and has 714 ethnicities with more than 1100 regional languages. According to him, local and national election should not divide the nation. Everyone, the President continued, is free to elect Mayors, Regents, Governors or Presidents according to his/her preference; yet after the election, everyone should remain united.

(Conflict) is very dangerous for this country, because the nation’s biggest assets are unity, brotherhood and harmony, the President said.

President Jokowi also cited an example that during the recently concluded 2018 Asian Games, everyone supports pencak silat or badminton athletes without questioning the athletes religion, ethnicities or local languages.