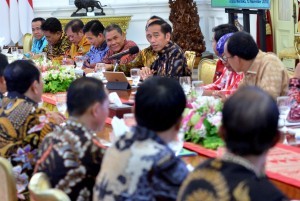 President Joko Jokowi Widodo admitted that the current global economic condition is indeed slowing and does not benefit Indonesia in term of economic growth.

Not to mention financial crisis in Turkey, Argentina, Brazil, and Venezuela in which those countries must deal with an inflation rate of more than 100 percent. There is also trade war between China and the United States that shows no signs of abating until now, President Jokowi said after receiving a number of regents from several parts of Indonesia, at the Merdeka Palace, Jakarta, Monday (12/11).

According to the President,  we should be aware and anticipate that condition because economic turmoil in a country could affect other countries. He also reminded all regents that economic policies particularly from the world’s largest economies such as the United States and China can also affect Indonesia.

Nevertheless, Alhamdulillah, praise be to Allah, we must be grateful that Indonesias economic performance in that condition remained stable. Based on the latest data from the Central Statistics Agency (BPS), our economic growth remained stable and increased to 5.17 percent in the third quarter. In addition, inflation can also be controlled at 3.23 percent, President Jokowi explained.