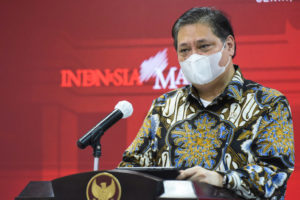 Indonesia has recorded its highest economic growth of 7.07 percent for the first time in the second quarter this year since the sub-prime mortgage crisis, according to Coordinating Minister for Economic Affairs Airlangga Hartarto.

“In the second quarter or in April-to-June period, Indonesia’s economy has grown 7.07 percent year-on-year, which is the highest quarterly Gross Domestic Product (GDP) growth rate since  the last sub-prime mortgage crisis,” Airlangga said in a virtual press conference on the Release of Indonesia’s Economic Growth Quarter II-2021, Thursday (5/8).

Airlangga also revealed that from the expenditure side, all components grew positively, those included household consumption and government consumption.

“The government consumption increased by 8.06 percent year-on-year, which is in line with the Government’s commitment to handling COVID-19 and national economic recovery,” he said.

The highest growth was recorded in exports and imports which grew respectively by 31.78 percent and 31.22 percent, in line with increasing domestic and global demand.

On the supply side, all business sectors grew positively and showed improved performance due to improving domestic demand. The highest growth was recorded by the transportation and warehousing sectors as well as the accommodation and food and beverage sectors.

“The transportation, the accommodation, and food and beverage sectors grew respectively by 25.10 percent and 21.58 percent year-on-year due to people’s high mobility,” he said.

Airlangga further said that the manufacturing sector and the trade sector as the main contributors to the country’s economy also positively grew high, driven by the improvement in the domestic and global economy.

A number of regions in Indonesia have also experienced positive growth. Java Island that serves as a contributor to the national economy was able to grow by 7.88 percent, followed by Maluku-Papua, Sulawesi, Kalimantan, Sumatra, and Bali-Nusa Tenggara.

Moreover, the Minister pointed out that various leading indicators of the domestic economy also showed prospects for improvement.

“If we look at the MSME sector [Micro, Small, and Medium Enterprises], we see that KUR (People’s Business Credit) has also shown improvement and KUR has recovered. As of July, the KUR figure has improved,” he said.

On that occasion, Airlangga also said that the spread of the Delta COVID-19 variant has resulted in a spike in active cases of more than 500 thousand cases. A number of efforts undertaken by the Government, including through the enforcement of Community Activity Restrictions (PPKM) Level 3 and Level 4 can lead to a decline in economic activity.

The Minister also expressed hope that the pandemic control strategy carried out by the Government can reduce the rate of transmission so that the acceleration of economic recovery can also be carried out. In line with the implementation of PPKM, the Government continues to accelerate vaccination and intensify the 3T and 3M health protocols.

“Of course, with the decrease in positivity rate and active cases, we still hope that the economy can be boosted in a positive direction again. In the third quarter, we are still considering when we can encourage people’s mobility activities because we will still implement the PPKM in August,” he remarked.

Along with the restrictions, Airlangga estimated that economic growth in the third quarter this year will not be as high as in the second quarter. However, the economy is expected to return to expansion in the fourth quarter. (TGH/UN) (RIF/LW)