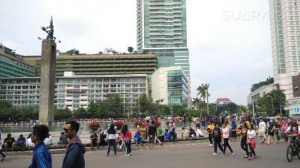 In a press statement, the Head of BPS Suryamin explained that economic growth in Indonesia in 2014 occured in all business fields, except on Mining and Quarrying which were contracted by 5.08 percent.

Information and Communication are the business fields which experienced the highest growth of 10.06 percent, followed by Financial and Insurance Services at 8.53 percent, and 8.08 percent in other fields, Suryamin said to the reporters at the office of Central Statistics Agency (BPS), Jakarta, on Friday (5/2) morning.

Regarding the economic growth in the fourth quarter of 2015 which experienced the highest growth by 5.04 percent, Suryamin explained that the growth occured in all business fields, except on Mining and Quarrying which were contracted by 7.91 percent. In the meantime, Financial and Insurance Services experienced the highest growth of 12.52 percent, followed by Information and Communication 9.74 percent, and Construction 8.24 percent.

Indonesias economy in the fourth quarter of 2015 was contracted by 1.83 percent. On the production side, it was due to seasonal effect on Agriculture, Forestry, and Fisheries Business Fields which were contracted by 23.34 percent. While on the expenditure side, it was caused by a decrease in net export,” Suryamin said. (Humas BPS/ES) (RAS/MMD/YM/Naster)