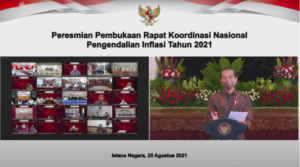 Indonesia’s economy is improving with controlled inflation rate despite the current uncertainties due to the pandemic, President Joko “Jokowi” Widodo has said.

The President made the statement on Wednesday (25/08) during the inauguration of the 2021 National Coordination Meeting on Inflation Control at the State Palace in Jakarta.

“We must be grateful. Although we are still facing uncertainties, our national economy is improving. However, we must remain vigilant,” he said.

The President pointed out that in the second quarter of 2021, the national economy grew by 7.07 percent (year-on-year/YoY) with the national inflation rate controlled at 1.52 percent (YoY), which is much below the 2021 inflation target at 3 percent.

“Nevertheless, we are also aware that low inflation can be unpleasant because it can indicate the people’s decreasing purchasing power due to activity and mobility restrictions,” he said.

Therefore, the Head of State urged related ministries / state institutions to remain vigilant and careful with balancing COVID-19 management and economic recovery in the third quarter of 2021.

“Do remain vigilant. We must remain careful to strike a balance between health and economy, control the gas and brake. We must be able to control COVID-19 transmission and protect vulnerable groups,” he said.

In the meantime, Governor of central bank Bank Indonesia Perry Warjiyo reported that as of July 2021, inflation remained low in almost all regions.

“In line with the maintained exchange rate expectation and stability, low demands and supplies, we have predicted that inflation in 2021 and 2022 will remain in the target range, namely 3 percent ± 1 percent,” he said, adding that the risk of increased inflation in 2022 must be anticipated as domestic demands rise and global commodity prices soar.

The Governor also expressed appreciation to all parties in the Central Government and regional governments who have synergized to achieve price stability so the national economy can be revived and public wellbeing can be maintained.

“Maintained price stability, especially food price, must be used as a momentum to strengthen the roles of MSMEs in order to revive Indonesia’s economy and improve public wellbeing,” he remarked.

During the 2021 National Coordination Meeting on Inflation Control that adopted the theme of “Strengthening the Roles of Food MSMEs Through Digitalization Optimization for Economic Recovery and Food Price Stability”, winners of the 2020 Regional Inflation Control Team (TPID) Award were announced.

The winners of TPID Award are as follows: