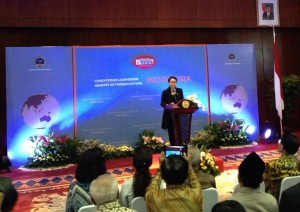 “The five pillars are: 1. Building a maritime culture; 2. Preservation and management of marine resources; 3. Build the infrastructure and maritime connectivity; 4. Maritime cooperation through diplomacy; and 5. Development of maritime defense forces, “said Retno in the annual statement as Foreign Affairs Minister, at the Ministry of Foreign Affairs, Jakarta, Thursday (8/1).

Based on the vision and mission of President Jokowi, according to FM, within 5 (five) years ahead will be prioritized on: a. Maintain the sovereignty of Indonesia; b. Improve the protection of citizens and legal entities of Indonesia; and c. Improving economic diplomacy.

Maintain the Sovereignty of Indonesia

According to Foreign Minister Retno Marsudi, Indonesian diplomacy will be done to protect the sovereignty of the Republic of Indonesia. She emphasized that international relations should be based on the principle of respect for territorial integrity of each country. “Indonesia will not allow these principles are violated by anyone else,” said Foreign Minister.

Related to the completion of maritime boundary, FM continued, Indonesia has compiled the roadmap border negotiations. “The government of Indonesian will also increase the attendance in the border region,” he said.

The strengthening of protection for Indonesian migrant workers, continued Retno, will also be conducted at the regional level, including encouraging the establishment of the instruments of ASEAN legal on the protection of migrant workers who are non-discriminatory.

“The diplomacy and Indonesian foreign politics must be able to provide protection and security for citizens and Indonesian legal entities abroad,” Foreign Minister said. While that the related with priority in improving of economic diplomacy, Foreign Minister explained, regional and international cooperation on the field of maritime infrastructure, energy, fisheries and conservation of marine environment will be improved.

At the bilateral level, Foreign Minister continued, maritime cooperation will also be developed in the framework of strategic partnerships, and comprehensive with friendly countries. Foreign Minister added that the Government of Indonesia’s commitment and determination to enforce the law of the sea in order to combat of illegal fishing will be forwarded.

Regarding to Indonesian economic diplomacy, according to Foreign Minister, will also focused on efforts to accelerate infrastructure development and connectivity. “The Development of deep sea ports and development of power plants account for some of the fields that could be cooperated with foreign parties,” he said.

On the issue of trade, Foreign Minister said, efforts to increase the export of non-traditional and untapped market will continue to be implemented. He emphasized that Indonesia will not be able to accept the discrimination to the Indonesian commodities that treated unfairly by allegations baseless, as happened on Indonesian CPO.

The Foreign Minister also explained that the efforts to attract foreign capital to Indonesia will continue to be made. He believes the Government’s commitment to simplify the permitting and create “one stop service” will increase the interest of foreign investors to Indonesia.

“Currently, the government is finalizing a draft of Bilateral Investment Treaty, that would be a new treaty regime of Indonesian investment with other countries,” Retno said as he mentions, that the Indonesian diplomacy will also be directed at the efforts to support the self-sufficiency in food and energy sectors, especially new and renewable energy.

“This unit will coordinate with the Ministry/related institution to ensure that business opportunities, development cooperation, and economic agreements with other countries can be acted upon immediately,” said FM.

The Delivery of the annual speech of Foreign Minister in front of ambassadors of friendly countries, also attended by officials from the Foreign Ministry Echelon I and II, and hundreds of journalists from both domestic and foreign.  (Humas Kemenlu/ES)