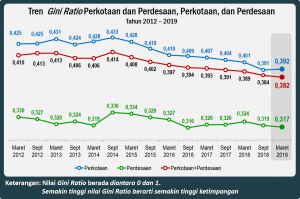 Inequality level in terms of expenditure among Indonesians as measured by Gini Ratio in March 2019 was recorded at 0.382, the Central Statistics Agency (BPS) has reported.

Suhariyanto further explained that in addition to Gini Ratio, another measure of inequality often used is the percentage of expenditure in the lowest 40 percent of the population group, known as the World Bank index.

“This means that there has been an improvement in the level of inequality during the period March 2018-March 2019,” he said.

According to Suhariyanto, the change in the level of inequality was strongly influenced by the large variation in changes in spending between population groups, adding that if changes in expenditure of the lower class population are faster than those in the upper and middle population, expenditure inequality will improve.

In the meantime, citing data from the National Socio-Economic Survey (Susenas), Suhariyanto stated that the increase in average per capita expenditure per month in the period of September 2018-March 2019 for the lowest 40 percent population group increased faster than the 40 percent middle class population and 20 percent highest.

The increase for the lowest 40 percent population group, 40 percent middle class, and the highest 20 percent, respectively are 2.48 percent, 0.71 percent, and 0.95 percent.

Suhariyanto further said that in March 2019, province with the highest Gini Ratio is Yogyakarta Special Region Province at 0.423, while the lowest is Bangka Belitung province with a Gini Ratio of 0.269.