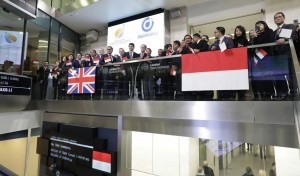 Responding to the issuance of the bonds, President Joko Jokowi Widodo said: It (the issuance of the bond) will increase liquidities and also shows that foreign investors have trust and a high interest to invest in Indonesia, the President said after attending the Organization for Islamic Conference (OIC) in Istanbul, Turkey on Wednesday (13/12).

President Jokowi also hopes that the issuance of the bonds can attract foreign investors to make investment in Indonesia so as to accelerate infrastructure development, provide more job opportunities in the country, and introduce Rupiah to foreign investors.

And it is also expected to open up new access to funding sources to finance infrastructure development, the President added.

The name Komodo itself is derived from the name of a large species of lizard called Komodo Dragon that can be found in Indonesias East Nusa Tenggara province. The naming pattern follows several countries that name their bonds using local currencies with objects that are regarded as their symbols or identities such as Dim Sum Bond owned by China and Masala Bond owned by India.

Investors interest in the bond is very high as the bonds were four times oversubscribed.