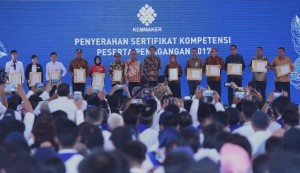 President Joko Jokowi Widodo said that Indonesian human resources have the abilities to compete with human resources from other countries. Nevertheless, the President acknowledged that the strength has not been capitalized on.

According to the President, Indonesia has 250 million people and 60% them are young people. The figure, the President said, is expected to increase and in 2040, it is estimated that the number of people within productive ages in Indonesia will reach 195 million.

The President made the statement in his remarks at the handover ceremony of Competence Certificates to participants of the National Apprenticeship Program at the Work Training Development Unit (BBPLK) in Bekasi, West Java, Wednesday (27/12).

President Jokowi pointed out that the fact that 60% of Indonesian population are those within productive ages is a strength.

This is our wealth and this is our opportunity to win the competition with other countries. If we can manage this, if we can make the most of these potentials, if we can capitalize on this, we will become a winning nation, the President said.

How to smile, perhaps, I dont know what they are taught. Maybe they are also trained how to greet good morning, good day, good afternoon, the President said.

President Jokowi also hopes that what have been gained and from the program can be bring real benefits for the development of human resources and bring benefits for the nation and for industries using their services.

Do remember that competence certificate is not the end of your journey. In fact, it is only just a beginning. Continue developing your competence, making innovation and show that Indonesian human resources can compete with other countries, the President said.