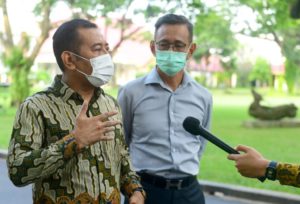 Indonesia’s rice stock until the end of the year is estimated to be sufficient.

“We are talking about what happened on the ground, matters related to the price, usually in month eleven, twelve, and one, the price is usually [not] under control and definitely rise, but Thank God, this time the price is stable,” Deputy Chairperson of the Indonesian Rice Millers and Traders Association (Perpadi) Billy Haryanto said after meeting with President Joko “Jokowi” Widodo at the Merdeka Palace, Jakarta (18/11).

Billy said that region such as Sragen regency, Central Java province is currently in the midst of a great harvest with good results. “This is excellent, Christmas and New Year’s [stock] is very safe,” he added.

According to the Deputy Chairperson, the President aimed to understand the condition on the ground directly from the rice traders. The President will also order Minister of Trade to check the price on the market.

In addition, Billy also asked the public not to panic because the food stock, especially rice, is very sufficient.

At the end of his statement, Billy stated that President Jokowi is careful on his decision whether to import or not. “The President is not in a hurry to import. if the rice is sufficient, why should we import it,” he said. (Presidential Secretariat/UN) (FI/MMB)