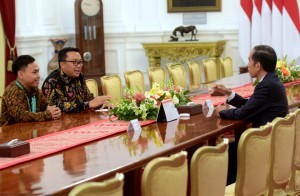 Eko Yuli Irawan, gold-winner and world champion weightlifting athlete in the 61 kg category championship in Turkmenistan, early November, expressed hope that he can win gold medal at the 2020 Olympics in Tokyo, Japan.

I set target to win gold at the 2020 Olympics. Hopefully I can have great support and gain maximum result, said Eko Yuli to reporters before meeting President Joko Jokowi Widodo, at the Merdeka Palace, Jakarta, Thursday (11/08).

Eko is feeling grateful to be able to win gold medals at the world championship, while at the same time breaking the world record for winning three gold medals from snatch, clean and jerk and total category.

I am grateful and proud to be able to give the best for the country, said Eko.

Eko went on say, at the Tokyo Olympics, his toughest rivals will be from Colombia, China and North Korea. According to Eko, today they are not ready yet but by the time going, they will prepare and develop their skills better.

Eko also expressed his grateful for the continuous support given by the Government, particularly the Indonesian Weightlifting, Powerlifting and Bodybuilding Association PABBSI since his participation at the 2016 Olympics in Rio de Janeiro, Brazil.

According to him, bonus from President Jokowi for Eko Yuli Irawan is Rp 250 million, while from Ministry of Youth and Sports is Rp 200 million. There will be another bonus from PABBSI, he continued.

Meanwhile, General Chairman of PABBSI Rosan Roslani said he will also provide bonus for Eko as well as the support team.