Industry Minister: Hyundai to Establish Production Base in Indonesia 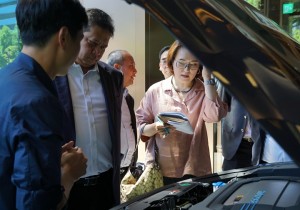 The South Korean automotive company, Hyundai Motor Company (HMC) has affirmed its commitment to immediately establish its production base in Indonesia to meet the needs of domestic and export markets, Minister of Industry Airlangga Hartarto has said during a meeting with Executive Vice President of HMC Park Hong Jae in Seoul, South Korea, Tuesday (25/6).

The vehicles types in production, he added, include SUVs, MPVs, hatchbacks, and sedans. Hyundai will market 47% of its production to the domestic market and the remaining 53% to the export market.

The Government will encourage investment in the electric vehicle industry by providing tax holiday facilities. During his visit to HMC, Airlangga had the opportunity to test Hyundai Nexo, a hydrogen-fueled car and observed its technology.

Airlangga went on to say that the location of Hyundai factory is still unconfirmed. However, it would be able to absorb a workforce of 3,500 people.

In the meantime, the Ministry’s Director General for Metals, Machinery, Transportation Equipment and Electronics Harjanto has said that Hyundai revealed its plans to build factories in the Southeast Asian region, with Indonesia as production base, at the beginning of January 2018.

“Indonesia has nickel ore which can be used for the production of lithium-ion batteries, an important component of electric vehicles,” Harjanto said, adding that some of the HMC total production capacity in Indonesia will be allocated for producing electric vehicles which most of them will be for Southeast Asia and Australia export markets, and the rest for domestic needs.

Meanwhile, Minister of Trade, Industry, and Energy (MoTIE) of South Korea Sung Yun Mo has stated that strengthening cooperation between Indonesia and South Korea covers many industrial sectors, not only the steel and chemical industry sector but will also target the automotive industry sector. The investment, he added, is critical in strengthening the manufacturing structure and improving industrial competitiveness in Indonesia.

“The automotive cooperation also opens opportunities for component suppliers. With a large number of needs on the vehicle component, it can also strengthen small-medium industries in Indonesia. This cooperation is very meaningful because it will increase competitiveness and contribute to a healthier industrial ecosystem, Sung Yun Mo said. (Ministry of Industry PR/ES)