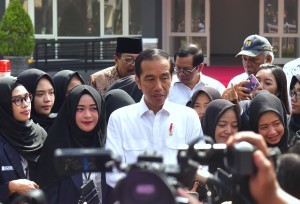 Inflation has been in check thanks to stable rice prices, according to President Joko Jokowi Widodo.

We found that there are dwindling medium-quality rice stocks in the market. After what I found in the market, inshaa Allah, there will be no problem, the President said on Friday (4/1) during the visit to Ngemplak Market in Tulungagung Regency to monitor food prices, including rice and chicken meat prices.

State-run logistics agency Perum Bulog, he added, has also conducted market operations to keep rice prices stable although prices of basic commodities in general remain stable. Surge in rice price, according to the President, normally occurs from December until January. The President also maintained that supply of medium-quality rice – priced at Rp8,500 per kilogram – is also sufficient

However, price of chicken meat reported an increase from Rp31,000 to Rp32,000 per kilogram and increase in prices of stable food, albeit small, must be taken into account as the Government wants to control prices, he said.

We will pay attention to the increase even though it is only a Rp1,000 increase. We learned that inadequate supply of animal feed to breeders has affected chicken meat prices, he said. (UN/RSF/RAH/OJI/ES)