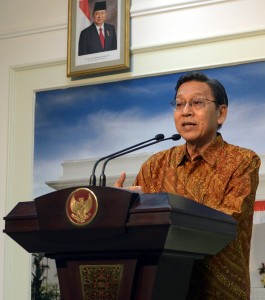 Vice President Boediono said that the Integrated Team of the Implementation of Presidential Instruction Number 1 of 2011 has successfully returned more than IDR 2,5 trillion of state money to the state treasury.

In a press conference after reporting to President Susilo Bambang Yudhoyono (SBY), in the Presidential Office Jakarta, on Tuesday, Vice President Boediono said that the team has repaired the system in several ministries and the law enforcing agency as well.

Considering the background of the Presidential Instruction issuance is to eradicate the practices of tax law mafia, then the system repairing focuses on the repair of tax sector, Boediono said.

The system repair consists of the formation of whistle blowing system internally, the analysis of agency restructuring, and computerization of several process to minimize physical interaction with the officers.

For three and a half years, the implementation of this Presidential Instruction has generated various repairs which are wider than just handling the Gayus case. The implementers of Presidential Instructions Number 1 of 2011 have identified assets connected to various deviation cases of state revenue in a very big amount. Those assets are IDR 4,574 trillion, US$ 718.868, and SIN$ 9,980 million and also tens of property assets where the values have not been set yet.

From that amount, IDR 2,596 trillion has been returned to state treasury. There is a deposit payment of tax appeals process for IDR 953 billion and the other assets seized. There are several asset executions for IDR 2.525 trillion that have waited the law process until they bind and the other properties. Surely, along with the ongoing law process of some cases, that number is confirmed to be increased.

For Gayus Tambunan case itself, the state has seized IDR 74 billion cash, 31 bars of gold for 100 grams each, 1 unit of house, 1 unit of apartment, and 2 cars. For all the cases that involved him, from the bribery of state officials until the passport forgery, Gayus gets 31 year imprisonment sentence.

The whole implementation of Presidential Instruction Number 1 of 2011 until October 2014 coordinates 11 cases of tax and other law prohibitions related to the fraud of state revenue. (Humas Setkab/ES)