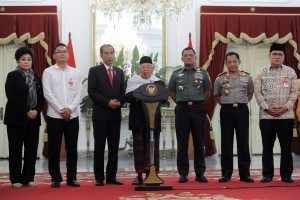 A number of interfaith figures have met with President Joko Jokowi Widodo to discuss the nations and states issues.

The figures have agreed with and fully supported the Government, the President, and its officials in maintaining the nations  unity and integrity.

We support the Government to stop any action considered may cause conflict amongst people. We have agreed to strengthen brotherhood among fellow Indonesians or is known as ukhuwah Islamiyyah,  Chairman of the Indonesian Ulema Council (MUI) K.H. Makruf Amin told the reporters after meeting President Jokowi on Tuesday (16/5), at the Merdeka Palace, Jakarta.

On behalf of all interfaith figures attended, Makruf Amin called on people that despite Indonesia is a democratic country, they should deliver their aspirations in the framework of laws, civility, courtesy, and good morals (akhlaqul karimah).

(It is) to support the measures of strengthening Pancasila and the 1945 constitution as the fundamental principles in the Unitary State of Indonesia and based on Unity in Diversity (Bhinneka Tunggal Ika).

These figures, Makruf Amin added, will strive to increase the dialog of the nations or halaqah in the society, so that it will strengthen the nationalism of the people and maintain the unity of the nations.