International Airport to be Built Near Borobudur 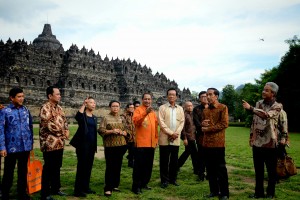 Therefore, according to Minister of Tourism Arief Yahya, the Government will develop Borobudur area as a main international standard destination.

Main destination means the people from abroad can go directly to Borobudur. If it has been determined as a main destination, it means an internatioal airport as well as international standar hotels must also be built, the Minister said to the journalists after a Limited Meeting in Manohara Hotel, Borobudur Temple area, Muntilan, Magelang Regency, Central Java, on Friday (29/1) afternoon.

Regarding the international airport, Minister Arief affirmed that it is not Ahmad Yani Airport, Semarang. We can build a new airport but it must be an airport that meets international standards like Soekarno Hatta Airport, he said.

However, I can not tell yet the location because Pak Jonan (Minister of Transportation) would be mad at me, the Minister answered the journalists, but he did not confirm that the airport he talked about is the one that now is built by the Government in Kulon Progo, Yogyakarta.

Arief Yahya also explained that the Limited Meeting has agreed to make Borobudur as the main tourists destination which tagline is Borobubur, the World Cultural Masterpiece.

From management side, the meeting has agreed to establish Borobudur Authority Agency. It will be managed integratedly because the Government is able to formulate the weaknesses. It is a single destination, but multi management. It is impossible for a company to have four or five CEOs. Thus, the Government has decided to establish Borobudur Authority Agency, the Minister explained.

This Management Agency will be under the President and it will coordinate with the Coordinating Minister forMaritime Affairs because it is this Ministry that will be the Managing Council.

It is still a proposal which will be decided by the President. The Executive Chairman is Minister of Tourism, Arief added.

Therefore, there will be Rp 20 trillion worth investment for the first step of Borobudur development. Rp 10 trillion of this amount comes from the Government in a form of basic infrastructure and the rest Rp 10 trillion comes from private investors.

The construction of hotels and other facilities will be offered to local or foreign private investors, Arief said.

Meanwhile, the Governor of Central Java Ganjar Pranowo who accompanied Minister Arief Yahya added that the Provincial Government of Central Java has given the budget to manage four tourism areas, such as Dieng, Sangiran, Karimun Jawa, and Borobudur.

This year, the Provincial Government has done the auction and hopefully it will accelerate the project  that has been explained by the Minister. I will coordinate with the Regents and I hope the reviews will finish this year so that next year we can start, Ganjar said. (SLN/AGG/ES)(MMB/YM/Naster)