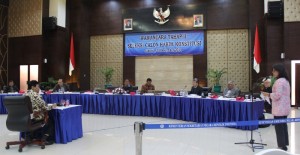 There were five candidates of Constitutional Court Judge who passed the first stage of interview and continued to the second stage. Afterward, the second stage presented two expert witnesses, they are former Religious Deputy Minister Nazarudin Umar and Post Graduate Program Director of Driyarkara School of Philosophy Franz Magnis Susesno.

Personal Matters until the Death Sentence

It is different with the first stage of interview last week, the second stage of interview selection had wider materials, starting from the substantial matter related to duties of Constitutional Court Judges until the very personal matters.

For example, a Constitutional Court Judge candidate Imam Anshori Saleh was sputtered with questions regarding his opinion about death sentence and independency matters since he will represent the government in his composition as a judge in the Constitutional Court.

Regarding the death sentence, Imam Anshori personally admitted that he objected to the application of that law. However as a citizen, he realized that he must obey the positive regulations applied in this country.

I think the death sentence is allowed but as a personal I do not agree with that since it will bring burdens and cannot be returned to fixed, How could that possible to return the life of someone who had been executed?, Imam said.

As for the private car purchased on behalf of his wife that used the rental budget given by the Household Matters Agency (BURT) when he was a member of the House of Representatives, Imam affirmed that there was no regulation that the money must be used for renting a house.

The money was given by the BURT and it would not be forbidden if we wanted to use it for the other things since we live in our own house, Imam said it

One of the members of Selection Committees Todung Mulya Lubis also questioned his position as an activist of Nahdlatul Ulama (NU) related to his affirmation if he becomes the judge member of Constitutional Court.

Although I live in NU environment but I depend on myself. I am sure, the law must be discipline, Imam answered.

We will have the last meeting on January 5, and will give the selection results to the President on the upcoming January 5, Saldi Isra said it.