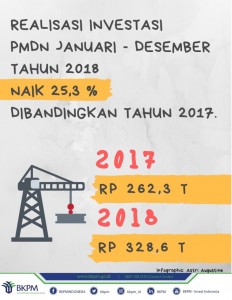 The investment realization of domestic investment (PMDN) and foreign investment (PMA) in 2018 reached Rp721.3 trillion, 4.1% higher compared to that of 2017, according to the Investment Coordinating Board (BKPM).

“Investment in 2018 reached 94.3% of targeted realization of the RPJMN (National Medium-Term Development Plan) which is Rp765 trillion,” Head of the BKPM Thomas Lembong said during a press conference in Jakarta, Wednesday (30/1).

Lembong went on to say that investment realization in 2018 is a result of the previous year’s efforts. Lack of policy implementation and constraints of external factors has affected the slowdown in investment this year, he said.

“The transition of licensing to the OSS System has affected the trend of investment slowdown this year, but we believe that improvement of the OSS System and pro-investment policies that are more effective than those of previous year will increase investment realization,” Lembong explained.

Furthermore, Lembong said that investment realization in 2018 was dominated by infrastructure sector such as power plants, toll roads, and telecommunications.

With the development of the telecommunications industry, Lembong expressed hope that digital technology-based industries and unicorn startups can continue to grow in the upcoming years.

“We take (those factors) into consideration in providing fiscal facilities in the form of tax holiday for digital economy industry,” Lembong said.

“The higher investment outside Java is one of the achievements that we believe can be improved in the upcoming years,” Thomas Lembong added.

In the meantime, Acting Deputy for Investment Implementation Control of the BKPM Farah Ratnadewi Indriani explained that the realization of employment in Indonesia in the fourth quarter of 2018 reached 255,239 workforces, 142,478 of them in national investment projects and 112,761 are in foreign investment projects.

Farah added that along with digital economy, Indonesia has other attractive investment sectors to be explored in 2019 such as lifestyle, Industry 4.0 and tourism industry, all of them will absorb the workforce. (EN/Humas BKPM/ES)