Irman Gusman Has Re-Elected As Chairman of DPD-RI 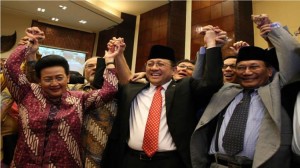 Irman Gusman Has Re-Elected As Chairman of DPD-RI

Member of Regional Council at The House (DPD-RI) from West Sumatera, Irman Gusman, has re-elected as chairman of DPD-RI for 2014  2019. Irman won over Farouk Muhammad in final round of the election, during plenary session DPD-RI at Senayan, Jakarta, on Thursday (2/10) evening. The election was led by Aidil Fitri Syah, and Irman Gusman got 66 votes, while his competitor got 53 votes.

In first round, Irman Gusman got 90 votes while Intsiawati Ayus got 22, GKR Hemas and Oesman Sapta Odang got 61 votes each, Farouk Muhammad got 49 votes, Bahar Ngitung got 19 votes, Nono Sampono got 47 votes, and Gede Pasek Suardika got 6 votes.

The head of plenary session, Aidil Fitri Syah explains the need to have re-election for two top candidates, because no one has votes more than 50 percent. The Final round results votes for Irman Gusman and 53 for Farouk Muhammad. Therefore, Irman Gusman has re-elected as chairman of DPD-RI for 2014  2019 (*/ES)(Ifp)