Istiqlal Renovation to Complete in March Next Year 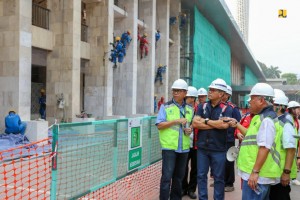 The renovation of the countrys iconic Istiqlal mosque in Central Jakarta is expected to be completed in March next year.

The renovation of the Istiqlal mosque is a follow-up to President Joko Jokowi Widodo’s order after joining Indian Prime Minister Narendra Modi to visit the mosque on 30 May 2018, Minister of Public Works and Public Housing Basuki Hadimuljono said during inspection to the mosque on Saturday (20/7).

According to Basuki, the renovation began in May this year and does not only cover the mosques interior but also its landscape to make the mosque not only a pride for Indonesian Moslems but also for the entire Indonesian people.

The renovation also includes increasing public green spaces in the mosque from 29 percent to 35 percent of the total 109.547 m2 and dredging the river located in front of the mosque.

During the renovation process, Basuki reminded the contractor not only to make the most of the function of the Istiqlal as a place of worship, but also to pay attention to its architecture, art, aesthetics aspects and maintain the mosque’s cultural preservation rules.

The renovation progress is now 4 percent or faster than planned. As many as 200 workers are involved in the renovation and we can increase the number into 400 people for a faster progress, the Minister added.

For the record, the Istiqlal mosque covers an area of 109,547 meter square with a building area of 80,948 meter square. The mosque can accommodate around 200,000 people.

The laying of the first stone of its construction was carried out in 1951 during the era of President Sukarno and was inaugurated by President Suharto in 1978.

The renovation of the mosque uses a budget of Rp465.3 billion done in 300 days using the Multi-Year State Budget (2019-2020). During the renovation process, people can still use the mosque for praying and doing other religious activities. (BKP Kementerian PUPR/ES)