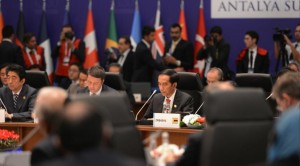 President Joko Jokowi Widodo, on Working Dinner Session of the G-20 Summit, on Sunday (15/11) said that extremism and terrorism happen everywhere. The Session particularly discussed Terrorism and Refugee Crisis. This is a challenge that needs to be followed up and addressed together through concrete actions, President Jokowi said.

President Jokowi thinks that one of the real negative impacts of the conflict happening in several places in the world is the increasing of irregular migration. Irregular migrant issue has become a quite serious challenge, particularly for Turkey and European countries.

To solve this problem, according to the President, we need to solve the core problem first, which is to ensure a balance development, to stop violence and oppression and to eradicate discrimination, as well as to uphold democracy.

Furthermore, President Jokowi added that so far, Indonesia is applying the combination of hard approach, that stressing on law and security enforcement, and soft approach stressing on cultural and religious approaches in order to solve extremism problem in Indonesia.

As a country with the largest Muslim population as well as the third-largest democracy nation in the world, President Jokowi assumed that Indonesia is a laboratory that showing Islam, democracy and diversity can live in harmony. The harmony of diversity and tolerance is the real condition of life in Indonesia.

President Jokowi closing his statement on the Working Dinner Session by expressing Indonesian Governments commitment to cooperate with international society in order to combat extremism and terrorism, as well as to foster tolerance, both in Indonesia and in the world. (TKP/ES) (RAS/MMB/YM/Naster)