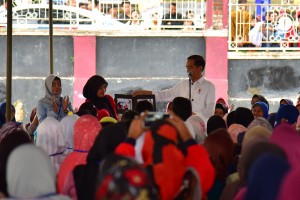 On that occasion, the President expressed happiness because there have been more than one million recipients of this Mekaar program in West Java, particularly women. He also stressed  that in order to be a successful entrepreneur, one must work harder and be disciplined, starting the business from super micro, micro, small, to higher level and so on.

The President also said  running a business takes persistent and hard work and suggested to upgrade the business, from selling meatballs to opening stalls and restaurants. He also reminded the participants that the loan money should be used for productive uses.