Its been open and free, President Jokowi Asks Media Not to Cause Peoples Pessimism 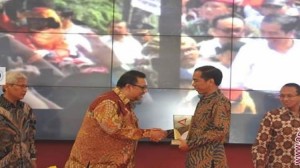 President Joko Widodo (Jokowi) said that media had been open and free now; anything and anyone could be reported. The news could be good, bad or moderate news. Yet, the President reminded that it should not hurt or stab people.

News may bite but should not hurt, bite to educate not bleed the people, Jokowi said as he attended the peak of 77th Anniversary of State News Agency (LKBN) Antara in Wisma Antara, Jl. Medan Merdeka Selatan 17, Jakarta, on Thursday evening (18/12).

According to the Head of State, currently media had become an industry in which market needs was the main concern. He admitted that market was fond of sensational news. But for the goodness of the nation, Head of State asked media to move the people towards enlightening direction in any case.

Therefore, the President continued, medias role as social control was necessary. Yet the President hoped that it should not cause pessimism in community.

The President believed Indonesia would be brighter in the future despite many obstacle, hurdles, and barriers. Hence, it was not right if anyone was pessimist.

Lest we are offered news which bites, sharp yet uneducated every day, if this continues, a negative state perception will be formed, frequently feel pessimist, while on the other hand we want to build fully optimistic hope, the President said.

Antara becomes homework for government. Antara should have responsibility in building good opinion, especially in the framework of utility which moves and organizes community towards good things, President delivered his message.

In the opportunity, President Joko Widodo who was accompanied by Minister of Communication and Information Rudiantara received Antara Achievement Award given by Managing Director of LKBN Antara Saiful Hadi.