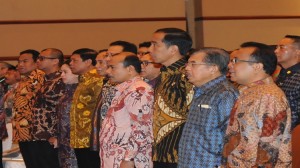 Our country is already on drugs emergency. There are 64 people who have been sentenced to death by the court and those petitions for clemency will not be granted,  I will not give any clemency for drug cases, I wont, I will not, President affirmed it and the audience in Bhirawa Assembly of Bidakara Hotel gave ovation.

President reminded that the one who decided, sentenced them to death was the court, not the President. But, if they asked for forgiveness, President Jokowi affirmed that they will not get it.

The willpower had been delivered by President Jokowi when he gave presidential lecture in the University of Gadjah Mada (UGM) Yogyakarta, on last Tuesday.

At that time, President Jokowi said that everyday there are 40-50 Indonesian people particularly our next generation who died because of drugs. Meanwhile, the petitions of clemency from 64 drug dealers who have been sentenced to death by the court are in the President Jokowis table.

Once they are on my table, I have said this; I will not give anybody the clemency for drugs. No..no..no…, Jokowi affirmed it at that time. (Kun/Wid/Humas Setkab/ES)