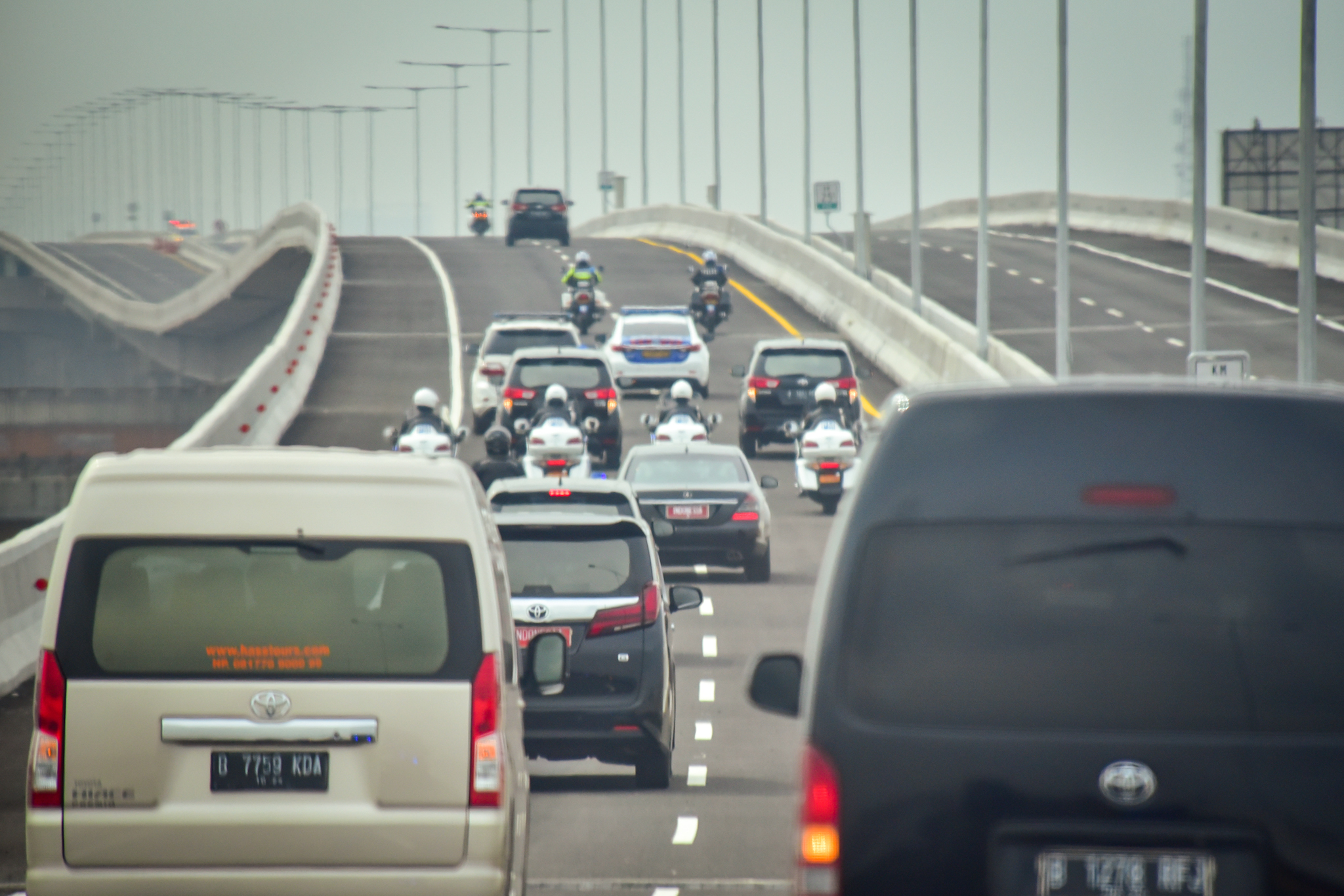 President Jokowi and his entourage test the Jakarta-Cikampek Elevated Toll Road, before inaugurating the toll road on Thursday (12/12). (Photo by: AGUNG/PR)

Jakarta-Cikampek elevated toll road is set to be opened a few days after its inauguration on Thursday (12/2) to ensure its cleanliness and completeness of road signs.

“The faster the better, but it is certain that before 20 December 2019, it can be used for public for free until Christmas and New Year 2020 holidays, Minister of Public Works and Public Housing (PUPR) Basuki Hadimuljono stated, as quoted in the Ministry’s portal, Thursday (12/12).

Basuki also ensured that the construction phase of the 36.4 Km elevated toll road has been completed and its condition has been declared safe after a series of load tests and direct tests.

“The construction has been declared safe after the load tests. All that remains is to smooth the bridge connection (expansion joint) to add comfort,” Basuki said.

The Government, according to Basuki, faced many challenges during the construction of this longest elevated toll road in Indonesia.

“The traffic (on the location) is about 200 thousand per day so it requires high caution. The windows time to construct the toll road is only from 10 pm to 5 am, while Saturday-Sunday and holidays, the construction is often halted,” he said.

In addition, Basuki added, along with the construction of the toll road, there were also two other projects that were being built, namely the high-speed train and LRT. So, he said, a lot of coordination is needed where a meeting was held almost every week.

Although the structure enables it to hold large tonnage vehicles, vehicle restrictions will be imposed where only the light tonnage vehicles class I and II are allowed to pass, the Minister said.

This is related to traffic management to avoid congestion due to the slowing down of large-tonnage vehicles when climbing into the elevated toll road, he added.

“For this reason, a height limit portal will be installed so that large tonnage vehicles cannot enter and (the toll road) the toll road will be equipped with 113 CCTV cameras installed by (state-owned toll operator) PT. Jasa Marga for security,” Basuki stated.

Meanwhile, President Director of PT Jasa Marga Cikampek Flyover (JJC) Djoko Dwijono expressed hope that the opening of the elevated toll road will reduce congestion on the Jakarta-Cikampek Toll Road by about 30%.

“Class I  vehicles are expected to use the (elevated toll road) thus reducing the density on the underpass,” he said.

Djoko said that the elevated toll road is equipped with 8 emergency access lanes that are connected to each interchange on the existing lane.

For the record, the elevated toll road is a part of the existing Jakarta-Cikampek Toll Road, stretching from the Cikunir section to West Karawang (Sta 9+500 to Sta 47+500).

Its operations are carried out by a subsidiary of PT. Jasamarga,  PT Jasamarga Jalan Layang Cikampek (JJC).