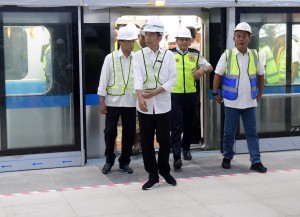 The President arrived at the Station at around 09:00 a.m. Western Indonesian Time and was welcomed by Minister of Transportation Budi Karya Sumadi and Governor of Jakarta Anies Baswedan.

After briefly inspecting the MRT Station at Hotel Indonesia traffic circle in Central Jakarta, President Jokowi and his entourage departed for the Lebak Bulus Depot in South Jakarta. The MRT itself is planned to be operational in 2019.

Upon his arrival at Lebak Bulus, accompanied by the Minister and the Governor, the President answered the reporters questions regarding the MRT. After the question and answer session was over, President Jokowi and his entourage returned to the Hotel Indonesia traffic circle.

On the occasion, Governor Anies Baswedan said that this trial aims to check the MRTs infrastructure readiness. It was performed with passengers so that MRT officers will be ready to serve the passengers when the MRT fully operates.

The trial forces all officers to get used to the passengers. Currently, all officers work without passengers solely for infrastructure aspects, Anies said, adding that the MRT is estimated to be operational in January/February 2019.

The MRT construction, according to Anies, has reached 97.08 percent and will be continued until the end of December 2018. (DND/RAH/ES)