Japan Will Not Participate in Jakarta-Bandung Fast-train Project 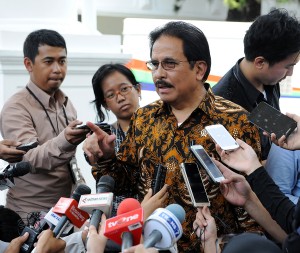 Minister of National Development Planning (PPN)/ the Head of National Development Planning Agency (Bappenas) Sofyan Djalil ensured that Japanese State-Owned Enterprise (BUMN) and private enterprise will not participate in the fast-train mega project connecting Jakarta and Bandung. However, the Government of Japan dan Indonesia are still intensively cooperating in other infrastructure projects.

Japanese private sector will not involve in the framework of business to business cooperation on fast-train project because it is not in accordance with business model and regulation of Japanese Government, said Sofyan who just landed in Jakarta on Wednesday (30/9), after assigned by President Joko Widodo to meet Japanese Government officials to deliver the Governments decision on the plan to build fast-train connecting Jakarta and Bandung.

Sofyan explained that business model and regulation of Japanese Government does not allow assistance or credit concession to be handed to Japanese enterprises.

The cooperation plan of Japan in this project, initially, is using intergovernmental assistance scheme, with condition, Indonesian Government should provide the budget.

After Japan finished the first stage feasibility study of fast-train project, the Government of China also delivered his interest to working on the project.

According to the result of Japans study, the cost to build the project is around USD 6.2 billion, meanwhile, according to China Republic, the cost is USD 5.5 billion.

The Government of Indonesia finally decided to refuse proposals from both countries because of three points; the project is better based on business to business (B to B), does not burden the State Budget, and there is no guarantee from the Government.

We do not want to burden the State Budget. Thus, I have decided that the fast-train project shall not use the State Budget. There is no guarantee from the Government. Therefore, I handed the issue to BUMN to conduct  business to business (B to B) scheme, President Joko Widodo said when visiting residents of Rawa Badak Selatan Sub-district, Koja Sub district, North Jakarta, on Thursday (3/9).

Sofyan Djalil admitted there are some points from several experts as well as financial institutions that said the high cost mega project will be difficult to conduct with business to business scheme. Otherwise, it needs government guarantee.

Sofyan, in a meeting with Yoshihide Suga, asserted that his side has delivered the position of Indonesian Government that will still open to the cooperation with Japan in other infrastructure projects, for example, the construction of replacement project in Cilamaya port, West Java.