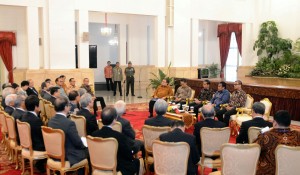 A total of 46 Japanese businessmen who are members of the Japan Business Federation, or Keidanren led by Chairman Sakakibara met President Joko Widodo, at the State Palace, Jakarta, Wednesday (8/4) afternoon.

Indonesian Ambassador to Japan Yusron Ihza Mahendra expressed that this meeting is a follow up of the meeting between President Jokowi with the Japanese businessmen on a visit to Japan recently.

“There are many issues discussed at the meeting, among other issues that concern us all this time, namely the construction of infrastructure, electricity, and also about the expectations the Japanese side to easiness in licensing,” said Yusron told to reporters after the meeting.

Yusron asserted, that the attendance Japanese top businessmen in the midst as a businessmen, after meeting President Jokowi some time ago hinted how important Indonesia for the Japanese business community.

“We hope that in 2015, Japan become the country’s most heavily invested in Indonesia,” Sakabira said.

Regarding investment in the field of electricity, Sakabira convey that many Japanese companies engaged in that field, ranging from steam, water, geothermal. However, there is a desire to increase investment or cooperation in the field for the future.

“That’s why we come here, to convey important matters to the President, especially what are the barriers to increase investment Japan for the energy sector,” Sakabira said.

According to Chairman Kaidanren, the perceived barriers of Japanese businessmen to increase investment in the energy sector, among others, inadequate infrastructure, for example ranging from ports, roads, electricity, and so on. In addition, the problem of traffic jams because there is no Mass Rapid Transport (MRT) and so on.