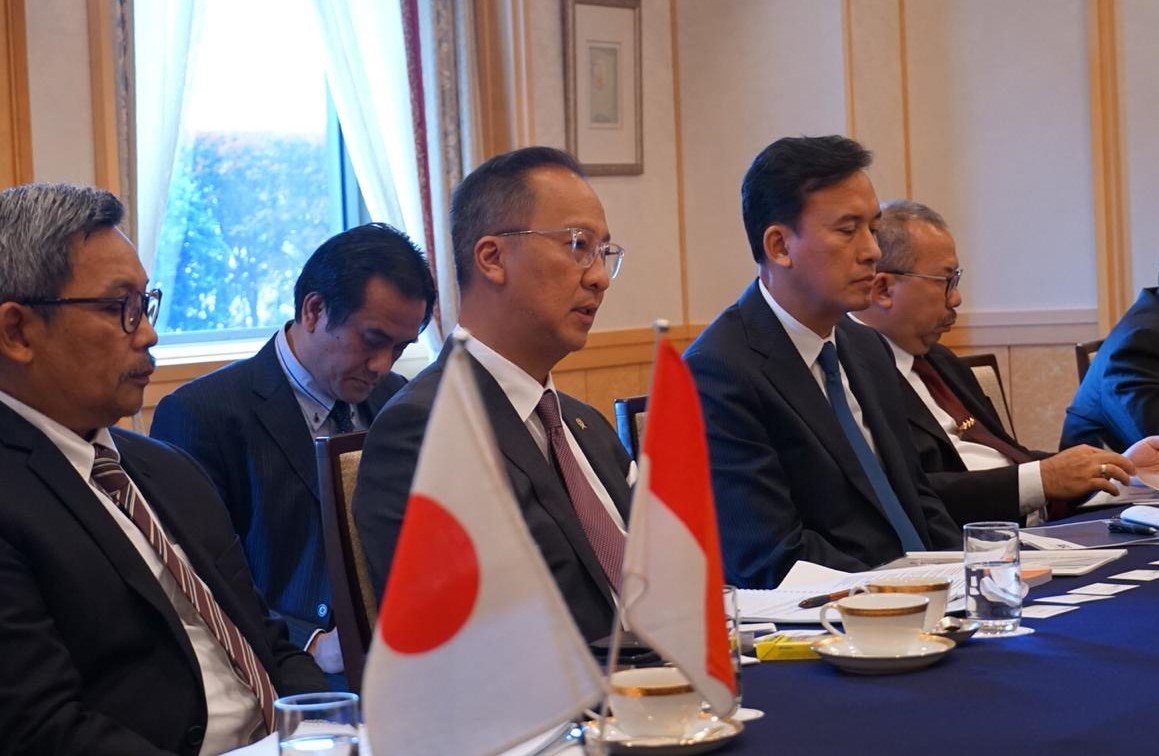 Minister of Industry Agus Gumiwang Kartasasmita is in a one-on-one meeting with a number of Japanese industry leaders, in Tokyo, Monday (18/11). (Photo by: Ministry of Industry Public Relations)

A number of Japanese large-scale industry players have affirmed their commitment to make Rp40 trillion of investment in Indonesia by 2023 during one-on-one meeting with Indonesian Ministry of Industry Agus Gumiwang Kartasasmita in Tokyo, Japan, Monday (18/11).

“In general, the meeting with Japanese industry players has produced an excellent result. They have affirmed their commitment to make new investment and expansion,” Agus Gumiwang Kartasasmita said in his statement.

Asahimas Chemical, a subsidiary company of AGC Inc. Japan will also make an investment of Rp1.3 trillion to expand the capacity of its polyvinyl chloride facilities phase 7 in Cilegon, Banten, Indonesia. The expansion of facilities with 200,000 metric tons per year is expected to be completed in the first semester of 2021.

On Asahi’s question regarding raw material supply for its industry, Agus added that Ministry of Industry -which has the responsibility to manage manufacture sector – will maintain a constant supply of raw material for industrial sector, including salt.

“We are committed to providing them with salt as raw material no matter how much they need,” he said.

The Minister went on to say that he had received many inputs from Japanese industry players who have an interest to invest in Indonesia. “The Ministry wants to explore and identify any challenges found in the industry on the ground,” he stated.

Although there are not many obstacles for Japanese investors in Indonesia, the Government must pay attention to several sectors, such as, raw material supply, labor wages, and regulation, he added.

“Asahimas Group, for example, has asked us not to raise industrial gas prices,” Agus said, adding that his Ministry will coordinate with other ministries including Ministry of Energy and Mineral Resources to discuss about the issue.

The Indonesian counterpart also expressed hope that labor wage in Indonesia will be improved. Thus, the Ministry said that he will evaluate the current labor waging system.

“We will take sectoral approaches. We will also give specific treatment for industries considered labor intensive or generating foreign exchange,” Agus added.

“We’ve learned about Rp28.3 trillion of an expansion plan of Toyota Group, including its subsidiaries such as Daihatsu and Hino,” he said.

The investment will be realized in the next five years (2019-2023) for developing their business in Indonesia.

In addition, Honda also stated that the company will realize Rp5.1 trillion of investment in Indonesia for 2019-2023.

“The investment is also a part of industry deepening, industrial localization program since Honda also aims to build its center for research and development (R&D) in Indonesia,” Agus explained.

During the meeting, the Ministry also invited investors to build its R&D in Indonesia. “I have explained to them about the Government Regulation Number 45/2019 on super deduction tax facility of 300 percent for those who want to build R&D in Indonesia,” he stated.

The Minister expressed hope that Krakatau Nippon Steel Sumikin (Nippon Steel Group) can increase the production of local cold rolled coil (CRC) so that Indonesia’s percentage of local content (TKDN) in automotive sector can increase and can reduce import. The objective is in line with the Ministry’s policy to substitute CRC, which is still imported from Japan as the raw material for automotive sector. (Ministry of Industry Public Relations/ES)