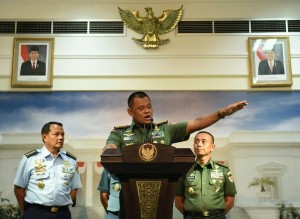 The Commander of Indonesian National Defense Forces (TNI) General Gatot Nurmantyo said that recently flights in Java are overcrowded. There are more than 1,200 flights, most of them passing the north coast, per day. In fact, Java has many combat aircrafts bases, such as in Madiun, Yogya, and Malang, indicating TNIs forces are concentrated in Java.

This is wrong. Therefore, in order to pave the way for commercial flights and to give accesses for pilots to fly and practice anytime, we will expand (the military bases) in Biak, Morotai, Merauke, and so on, said General Gatot to the press after the Limited Meeting at the Presidential Office, Jakarta, on Tuesday (23/2) afternoon.

When will the development program in Biak, Morotai and Merauke begin?

We are ordered to observe, analyze the best place among the bases, then we will make the plan, said Gatot.

To be clear, added General Gatot, TNI would start the expansion to the vacant areas in the east. He took Sukhoi as an example. The plane needs an oxygen equipment for taking off.  We only have that kind of equipment in the west, we dont have it in the east. We should equip it in the near future, said Gatot.

TNI Commander also mentioned that considering the use of effective budget, there are is any possibility that TNI would construct the new bases themselves.

This is what we forgot. TNI only has 2 Village Supervisory Non-commissioned Officers (Babinsa), 2 Navy posts, with limited equipment. We need to consider this [to increase aour defense force] so that we will have eyes and ears on our outer islands that can inform us on all development, said Gatot.

TNI Commander emphasized that the outer islands bordering Australia should be fully protected by the Navy and Air Force. Furthermore, the development of the transfer of Air Forces and Navys bases should also be taken into account. For example, Navys Eastern fleet takes about 8 days to sail to Aru Island.

Within 2-months operation, it needs 25 % (of the fuel), it will take 16 days to return to the base, so we need another port there, said Gatot.

Speaking of the possibilities of budget addition from the Government, General Gatot Nurmantyo stated that the program proposed by TNI depending on the State Budget (APBN) and some other things. However¸ President Jokowi emphasized that the budget should be calculated accurately and in details and as cost-effective as it could be. (DID/FID/ES) (KAW/MT/NA/LW)