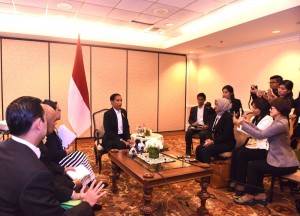 On the sidelines of his working visit to the United States (15/2), President Joko Jokowi Widodo asserted that his visit this time has nothing to do with the Trans Pacific Partnership (TPP).

Let me give a clarification about the TPP. During my visit to Washington DC in October last year, I told President Obama that Indonesia intended to join the TPP. However, I would like to reiterate that this is a long process and it can probably take two or three years, the President said.

According to the President, the Government wants to study first the Free Trade Agreement (FTA) implemented at the European Union (EU) and that also requires a process that cannot be completed in one month, two months, six months, or a year.

President Jokowi added that there are still steps to be taken before joining the TPP but most importantly, he said, caution must be exercised in calculating the pluses and minuses for Indonesias national interests.

We have to calculate everything. Its still in the process. So we come here for the US-ASEAN Summit has nothing to do with TPP, not for this time, the President said.

Echoing the Presidents statement, Indonesian Minister of Trade Thomas Lembong said that from the time the Government delivered its intention to join the TPP until it makes an official decision takes a long process and there are technical processes and political processes involved.

Just like in all developed countries, in our country too all FTAs must also be ratified by the parliament. So theres a political process too, the Minister said.

According to Lembong, countries founded the TPP have only signed agreements but not ratified the TPP and those countries also have to obtain approval from their respective parliaments for ratification that takes1 -2 years.

Also, let me correct the perception that TPP is like a ceiling, that it has been prepared and readied by countries who found it, that it is closed for negotiation. Thats not correct, Lembong said.

According to the Minister, the TPP is still open for negotiation by accommodating additional members such as South Korea, the Philippines, who have expressed their intentions to join and Thailand will probably convey its intention (to join the TPP)this week.

Every country, Lembong added, has its own uniqueness, has its own requirements and FTA is always negotiable by nature and must be adjusted with member countries which join.

So once again, only add details, the process is still long and the Government certainly wont be greedy. The reason we join the TPP is certainly for the sake of our national interests, to advance our economy, to create job opportunities and the President has clearly and firmly instructed us to conduct the right negotiation, to defend national interests and to ensure that it will bring benefits for us, the Minister added. (SLN/UN/EN)(EP/YM/Naster)