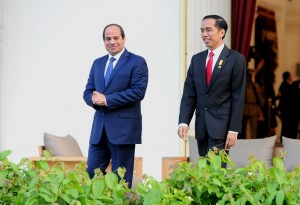 “We hereby affirm our guarantee that the Egyptian Government will keep and provide security to them, to anyone that is in Egyptian territory,” said President Al Sisi in the press conference together with President Joko Widodo (Jokowi), at the State Palace, Jakarta, Friday (4/9) evening.

The statement by the President of Egypt was delivered to respond to the request of President Jokowi presented in the joint press statement, that the Government of Egypt to provide protection for about 3,000 students and about 1,200 Indonesian migrant workers in Egypt.

“I said that the Government of Indonesia requesting protection for Indonesian citizens in Egypt. Because the number of students there are approximately 3,000 people and Indonesian migrant workers there are about 1,200 people. His Majesty had agreed to it,” President Jokowi said on the occasion of the joint press statement.

Previously, President Jokowi stressed that Indonesia and Egypt has a close relationship, which has long existed. Egypt is one of the first countries to recognize the independence of Indonesia.

While Egyptian President Abdel Fatah al-Sisi on the occasion also delivered special invitations to the President Jokowi to visit Egypt. “As well as the follow-up of bilateral talks today, we expect Your Excellency,” Al Sisi said.

As reported previously, in a bilateral meeting between the delegation of the Government of Indonesia and the Government of Egypt, at the State Palace, Jakarta, Friday (4/9) afternoon, has signed two cooperation agreement (MoU), namely on visa-free for holders of diplomatic passports and official passports, in order to increase the intensity of inter-governmental relations.

The signers conducted by the Ministry of Foreign Affairs Retno Marsudi and Egyptian Foreign Minister Ahmed Aboul Gheit. Both Foreign Ministers also signed an agreement on training of diplomats. (UN/WID/GUN/ES)/Sy.