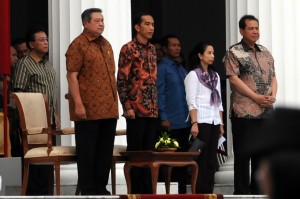 The procession of the dress rehearsal was started by the cavalry which entered the yard and then made a formation. Then, the actors who played the roles of President SBY and President-elect Jokowi entered the dais of honor. Accompanied by the marching band of the Presidential Security Guards (Paspampres), both actors made a line of honor.

Then came the recitation of a poem to say good-bye to President SBY and the choir who sang the song titled Pantang Mundur (Never Give Up) composed by Titiek Puspa.

In the end of the procession, several soldiers formed a cordon to respect and to escort President SBY who was about to leave the Palace.

President SBY and President-elect Jokowi watched the dress rehearsal until 05.30 PM west Indonesia time and then left the terrace of Merdeka Palace.