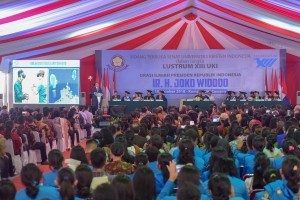 Ahead of political contestation in April 2019, President Joko Jokowi Widodo invited the people to emulate the friendship of two national figures with different religions: Johanes Leimena and Mohammad Natsir.

Even though they come from different parties, the Indonesian Christian Party and the Masyumi Party, but they are very close in their daily relationships and in the vision of nationality, said President Jokowi when delivering a lecture to commemorate the 65th anniversary of Christian University of Indonesia (UKI), at the UKI Campus football field, Cawang, East Jakarta, Monday (15/10).

According to the President, we must avoid mockery, slander, and defamation. Let the two figures be the example that we should follow, he said.

President Jokowi reminded that Indonesia is a big country, with many differences in ethnicities, religions, traditions, customs, as well as regional languages.

Indonesia, continued the President, has 714 tribes with 1,100 more regional languages. The President then compared Indonesia with Singapore which only has 4 tribes, or Afghanistan with only 7 tribes.

There is no country with differences as many as Indonesia, he added.

Therefore, President Jokowi asked the people to keep our unity and do not let the election divide us.

Do not mocking, slander, defame each other. That is not part of Indonesian manners and ethics, said President Jokowi.

According to the President, political contestation should be a contest of ideas and working programs. Thus, the President asked the people to do small research of the candidates before the election day regarding their achievements and track records.

These are the challenges we will face in the future, he concluded.

Present on the event were Minister of Research and Technology Dikti M. Nasir, Rector of UKI and the UKI academic community. (DNA / JAY / ES) (STU/AW/Naster)