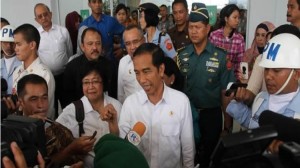 President Joko Widodo (Jokowi) affirmed that his government will review the companys permit that converts peat to be monoculture patterns that potentially to destroy the ecosystem.

I told Minister of Live Environment and Forestry Affairs, to review companies that convert peat to monoculture plants, in case it disturbs the ecosystem, President Jokowi said it after visiting the former location of land and forest fires in Meranti Islands County, Riau, on Thursday.

According to Jokowi, when he was observing the field in Riau, he found the existence of affected sago land because of the impact of monocultures planting patterns.

Jokowi also said that the green of the forest that we see from the air should be seen first, is it because of the various tropical forest or monoculture patterns or one plant only?

President affirmed that he will try to stop the land and forest damages happen in various locations such as Sumatera and Borneo.

In order the rain tropical forest owned by the Republic of Indonesia will not be replaced with concession plants such as palm and then the moratorium will be continued, Jokowi said.

After reviewing the location, President Jokowi and his entourage continued the flight by the presidential plane to go back to Jakarta.

Without entering the VVIP Room Lancang Kuning, President accompanied by First Lady Iriana Widodo directly went to the presidential plane along with the entourage to fly back to Jakarta. (Humas Setkab/ES)