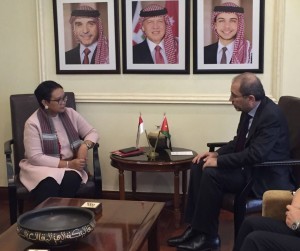 The Government of Jordan expresses its appreciation for firm measures of Indonesian diplomacy to address the decision of the President of the United States Donald Trump, who recognizes Jerusalem as the capital city of Israel.

We agree to continue to coordinate in fighting for the rights and independence of the Palestine, Minister Retno says.

On this occasion, she affirms Indonesias stance regarding the recognition of President Trump on Jerusalem. The statement of the US on the status of Jerusalem will not change strong commitment of Indonesia to fight for the independence of the Palestine, she says.

Minister Retno also explains that on Thursday (7/12), President Joko Widodo has condemned the decision of President Donald Trump who recognizes Jerusalem as the capital city of Israel and has asked the US Government to reconsider this decision. (Ditinfomed Kemlu/AS) (MMB/YM/Naster)