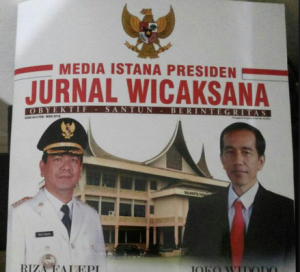 In the organizational structure, the media names the President of the Republic of Indonesia as its patron. It also lists Coordinating Minister for Political, Legal, and Security Affairs, Presidential Chief of Staff, Head of the Presidential Secretariat, and Head of Bureau for Press, Media, and Information Affairs as partner patrons.

Once again, any information of organizational structure mentioned in the media is not true, Head of Bureau for Press, Media, and Information Affairs of Presidential Secretariat Bey Machmudin said in a press release on Thursday (24/1).

Bey asserted what the media has done can be considered a violation of law as it misuses the name of person and an act of fraud; hence, it can be subject to a legal sanction. Bey also warned the public not to easily trust someone/something using the name of presidential media. (BPMI Setpres/ES)