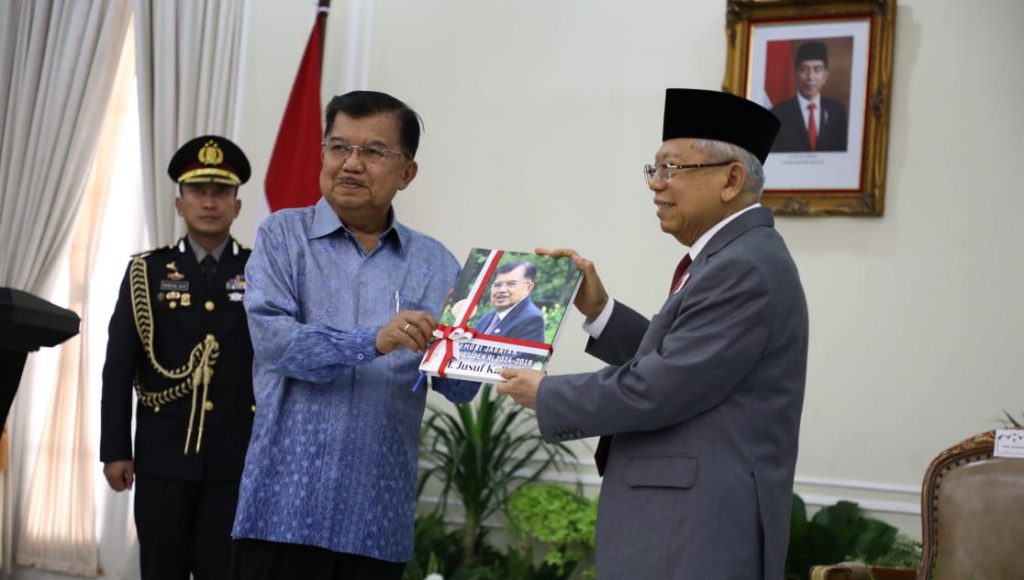 Kalla stated that the handover ceremony symbolizes the continuity of a government while praising leaders and staff at the Vice President Secretariat for their tremendous assistance.

Kalla also expressed hope that they will do the same for Ma’ruf Amin as the nature of the work of the Vice President requires big efforts.

In the meantime, Vice President Ma’ruf Amin expressed his appreciation for Jusuf Kalla’s achievements during his tenure as Vice President.

“I feel proud because I replace Jusuf Kalla as my predecessor. I am a santri (Islamic student). A santri is taught to respect his predecessor. But Jusuf Kalla was not only my predecessor but (he) has also made remarkable achievements as Vice President of the Republic of Indonesia,” Ma’ruf stated.

He went on to say that he seeks to continue the milestones that Jusuf Kalla has set, adding that there must be a continuation from one leader to another to ensure continuous improvement.

“I humbly ask Pak Jusuf Kalla, although you are no longer a vice president, to provide suggestions and insights for me so that I can carry out my duties properly,” he said.

The Vice President also said that he expects the leaders and staff of his office to be able to assist him in the next five years by continuing to maintain the spirit of mutual cooperation and assistance. “Hopefully, we will be able to continue what has been initiated by Jusuf Kalla. Thus, in the next five years, we can also deliver good results,” he said

On that occasion, Kalla also handed over Ma’ruf Amin the Memory Book covering his tenure as a vice president to provide insights on the works that were done in the previous period. (Indonesian Vice President Secretariat/ES)