KBRI Washington Prepares President Jokowi Visit to US Since November 2014 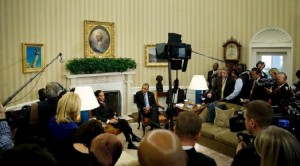 Indonesian Ambassador to the United States Budi Bowoleksono said that Michael Buehlers accusation through his article titled Waiting in the White House Lobby, on New Mandala website http://asiapacific.anu.edu.au on Friday (6/11) mentioning lobbyists took part on the meeting between President Joko Jokowi Widodo and US President Barack Obama at the  White House, Washington DC, US, on Monday (26/10) local time, was baseless.

The Ambassador also said that President Obama sent an official invitation to President Jokowi to visit the US through his letter on 16 March 2015 and President Jokowi replied to the letter on 19 June 2015 stating his willingness to visit Washington DC on 26 October 2015 after both countries agreed on a right schedule for both presidents.

Regarding rumor saying that the Indonesian Embassy (KBRI) in Washington DC was incompetent to give support to the Presidents state visit, Budi said that the issue did not reflect the facts on the ground.

He added that since November 2014, based on the Foreign Ministers instructions, KBRI in Washington DC prepared the Presidents visit to US, both in terms of formulating programs and ensuring concrete results of the meeting.

KBRI facilitated no less than 6 business visits of several big companies in US to Indonesia, Budi said, adding that he had also met nearly 100 US congressmen and senators to explain the important meaning of this visit and call on their support to make Presidents State Visit a success.

The Ambassador went on to say that to make sure concrete results from the visit, since the beginning, KBRI had discussed several strategic results of the visit with the US side.

Cooperation in defence, maritime and energy sectors are the concrete results which have strategic values, Budi said, adding that  business agreement worth more than US$ 20 billion is not coincidental, but the result of KBRI efforts in Washington DC since November 2014.

Budi asserted that several efforts have been made by KBRI and other sides in Indonesia to deliver business agreements and commitment of investment expansion to US companies.

He later mentioned that KBRI kept ensuring the way out of obstacles in investment or business which stopped for a long time, solution to several obstacles and legal issues that obstructed the upcoming investment and to facilitate communication between several parties in Indonesia that will provide trust to potential investors to commit in the investment and business agreement worth US$ 20 billion, as a result of the Presidents visit.

The press release in Washington DC also said that in preparing the visit, Ambassador Budi Bowoleksono always consulted with Minister of Foreign Affairs and Presidential Chief of Staff who was later appointed as the Coordinating Minister for Political, Legal and Security Affairs to ensure that the visit would bring concrete results in which have strategic values and business commitment according to Indonesias interests.

The Presidential Chief of Staffs visit was a part of several visits conducted by Indonesian Government officials to US in order to gain a momentum towards the Presidents visit, Budi said.

Besides the visit of Presidential Chief of Staff, according to KBRI, there were several visits from the Minister of Defence and Indonesian National Defence Forces Commander on defence cooperation; Minister of Energy and Mineral Resources (ESDM) visit on energy cooperation; the Speaker of the House of Representatives visit to discuss inter-parliamentary cooperation and the visit of Minister of Foreign Affairs.

During the meeting, both ministers officially announced that Indonesian Presidents visit to the US would be conducted on 26 October 2015.