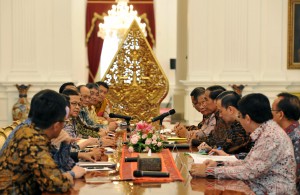 President Jokowi, accompanied by a number of ministers, has a meeting with KEIN officials at the Merdeka Palace on Friday (15/4)

The National Economic and Industry Committee (KEIN) said that there is a negative trend in Indonesias industrialization.

In fact, it is said that amidst global economic slowdown, if Indonesias industrialization stalls and it only imports raw materials, the country will be further left behind.

Therefore, KEIN called on the people to support industrialization by buying Indonesian products.

In this global era, there is an influx of products from other countries that we cannot stop. We have to be like other countries whose people have a big sense of nationality such as Japan and China who love their own domestic products, said Soetrisno Bachir, Chairman of KEIN after a meeting between KEIN officials and President Joko Jokowi Widodo at the Merdeka Palace on Friday (15/4).

Soetrisno also said that in these challenging times, Indonesia must tighten its belts and must also be smarter in facing difficult situations these days.

In the meantime, KEIN Secretary Putri K. Wardhani added that at the time when the global economic condition has not fully recovered, Indonesias capacity to export has also weakened, adding that in the first quarter of 2016, Indonesias exports have dropped but its imports have risen instead.

This is an indication that we have to respond together. Weve already reported to the President that we want to substitute imports by using local products. Certainly those are products that we can already produce at home, Putri said.

Regarding the Presidents wish to achieve double-digit industrial growth, Putri said that KEIN has invited the industrial architecture from the New Order Era to learn about the good patterns that were once implemented during the Era and to integrate those patterns with new systems and the current condition.

The President also said that if we want to achieve a double-digit growth, industry sector has to be a major locomotive to boost economic growth, Putri said, adding that other sectors such as financial sector, trade sector, and other sectors are expected to support the growth, so the Governments policies will further foster the growth of industries.

Putri added that after fifteen years, Indonesia has been a bit careless.

According to her, during the period, Indonesias economic growth happened to be positive and the global growth was positive as well so Indonesia was not really responsive to matters that eventually slowed down the growth of industries.

However, in such a condition, Putri added, it is the right time for Indonesia to gear itself and given its huge population (around 250 million people), Indonesia must provide more job opportunities and it is industry sector that can provide those job opportunities.

The President has given his supports for the inputs from KEIN and he hopes that when he returns from Europe for state visits, he wants to have a meeting with KEIN again, Putri said.