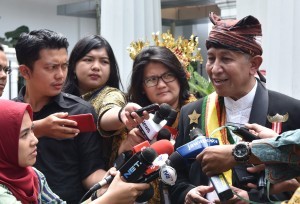 King Jan Christofer Benjamin of the Babau Kingdom, Kupang, East Nusa Tenggara (NTT), said in a meeting with President Joko Jokowi Widodo at the Bogor Presidential Palace, West Java, Thursday (4/1) afternoon, that the Kings and Sultans gave input to the Government to pay attention to the territorial land of the royals rights.

In response, according to Jan, President Jokowi conveyed the Government’s efforts that are currently encouraging to rebuild less productive land. “The Government and the Kingdom will utilize the current bedding aimed to improve people’s economy, build tourism in order to develop cultural values ??that rooted from the kingdom itself,” Jan explained.

Representing the Kings and Sultans, Jan believes the Government will pay attention to the arts and cultural issues rooted in the kingdoms of Indonesia. “We would like to thank the Government for the tremendous attention. In the future, the cultural character of this nation will be built through the kingdoms in order for tourism potential that can bring in foreign exchange,” Jan said.

Jan added that during the meeting, the President was pleased and said that the outcome of the meeting would be a special note for him in the future. “The President was very pleased with the meeting that what he had not known before, he can absorb directly from the Kings and Sultans in this archipelago,” Jan said.