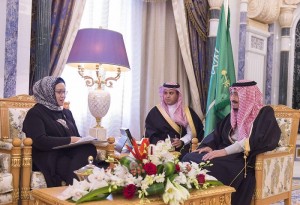 Minister of Foreign Affairs Retno Marsudi handed over a letter from President Joko Widodo containing a message of peace to King Salman Abdulaziz Al Saud at the Al-Yamamah Riyadh, on Monday (18/1).

King Salman welcomed the attention from Indonesia and asserted Saudi Arabias readiness to bring peace to the Middle East, including Iran, based on the principles of mutual respect and not by  interfering with other countriess internal affairs.

Saudi Arabia appreciated Indonesias move as the first country who conveys its readiness to contribute to bring peace to the Middle East, and to the improvement of Saudi and Irans relations, Minister of Foreign Affairs Retno said as reported in www.kemlu.go.id.

A similar letter has also been handed over by Minister Retno to the President of Iran, Hassan Rouhani, in Teheran, on Wednesday (13/1).

The President also stressed the importance to maintain communication. In this matter, Indonesia also plans to initiate track 2 activities and cooperate with the ulema.

A number of meetings shall be carried on in the Excellent Meeting of Foreign Affairs Ministers of Islamic Cooperation Organizations (OKI) Countries which will be held in Jeddah, Saudi Arabia, on Friday (21/1).

Indonesias step which serves as prove of Indonesias role and active contribution in international level aims to maintain global peace and stability.

The message of peace and attempt from Indonesia is carried out according to the mandate in the Preamble of the Constitution of Indonesia namely to participate toward the establishment of a world order based upon independence and eternal peace, Minister Retno firmly said.

Both ministers also discussed the follow-up of cooperation in 5 big projects in Indonesia, namely the plans to build new town in Mentawai, West Sumatra, Special Economic Zones in Tanjung Lesung, Mandalika, oil refinery in Tuban and Bontang, and the construction of 25,000 housing unit.

Besides regional peace issue and cooperation in the economy, the meeting with Minister Al Jubeir also discussed the cooperation in extremism and terrorism management, Retno said.

Minister Retno Marsudi also met with the Minister of Foreign Affairs of Iran after the handover of the Presidents letter to President Rouhani. The meeting stressed on the importance of economic cooperation between Indonesia and Iran. Through sanction removal to Iran, economic cooperation between Indonesia and Iran is estimated to increase.   (Dit Infomed Kemlu/ES) (RAS/EP/YM/Naster)