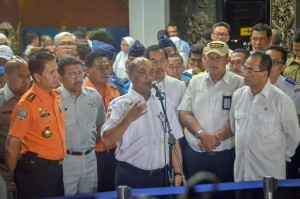 The Head of the KNKT Soerjanto Tjahjono in a press statement at the Crisis Center Command Post, Terminal I of Soekarno Hatta Airport (Soetta), Tangerang, Banten, Monday (29/10). (Photo by: Agung/Public Relations).

The National Transportation Safety Committee (KNKT) at this initial phase is prioritizing the search and rescue of the victims of Lion Air flight JT610 which crashed into the waters at the north part of Karawang, West Java province, on Monday (29/10).

We focused on the search and rescue of victims since this initial phase is the most critical for the victims, the Head of KNKT Soerjanto Tjahjono said in a press statement at the Crisis Center Command Post (Posko), Terminal I of Soekarno Hatta Airport (Soetta), Tangerang, Banten, Monday (29/10).

After all the victims had been evacuated, Soerjanto continued, the KNKT will fully investigate for the cause of the accident. As previously reported, Boeing 737-8 Max Lion Air flight JT 610 departing from Soekarno Hatta Airport, Banten, to Depati Amir Airport in Pangkal Pinang, Bangka Belitung, lost contact with authorities on Monday (29/10) at 06:33 a.m. West Indonesian Time.

Regarding the causes of the accident, Soerjanto suspected that the aircraft was destroyed when it crashed into the Tanjung Karawang waters, West Java.

The aircraft did not explode in the mid-air because its debris did not spread far from the crash point, Soerjano said.

According to Soerjanto, the plane hit the water surface very hard which made a number of body parts found around the scrash point. If it exploded in the mid-air, its debris will spread in kilos, he concluded. (GUN/AGG/ES)