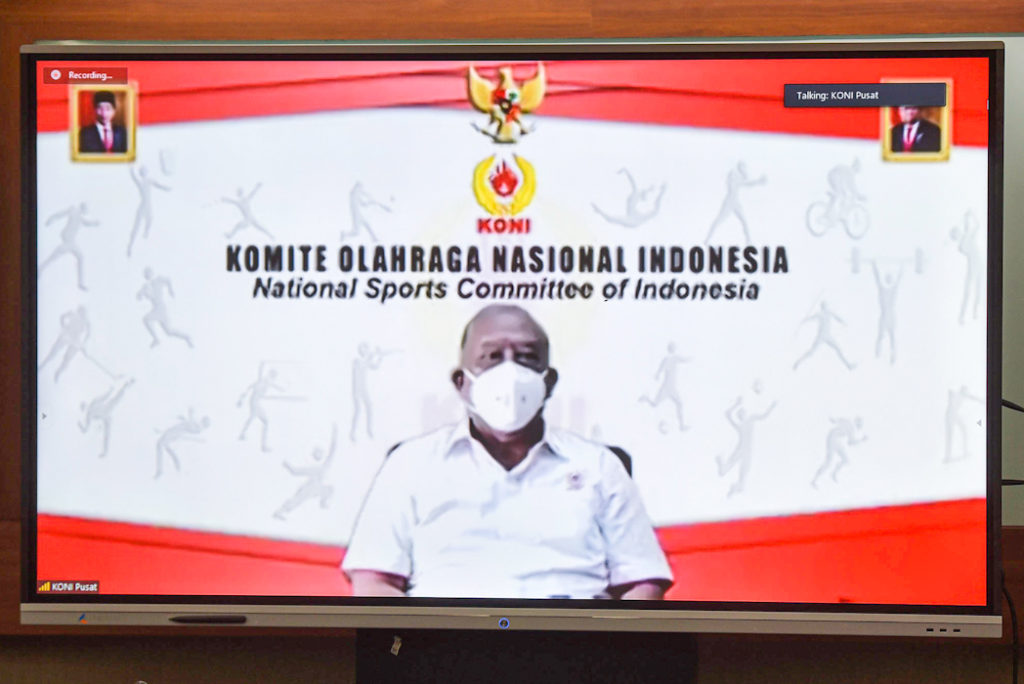 General Chairperson of the KONI Marciano Norman delivers press statement after attending a limited meeting on Preparation of the 20th PON in Papua through video conference, Tuesday (13/7) (Photo: Agung/PR)

The quadrennial event will be held on 2-15 October.

“In general, the PON Grand Committee and the KONI are ready to provide full support to give the best experiences of the event. We hope that this year’s PON can be better than the previous events,” General Chairperson of KONI Marciano Norman said, Tuesday (13/7).

According to Marciano, within eighty days towards the holding of the sports event, the KONI still has numerous things to do.

Related to the series of activities in the sport event, Marciano said that the last period of registration for athletes who will take part in the event is 1 August, before proceeding to Chef de Mission (CdM) meeting, Delegation Registration Meeting (DRM) and technical delegate (TD).

Regarding the readiness of athletes in training centers in 33 provinces.

“They are currently in the final stages of preparation and they have all been vaccinated in accordance with the direction of the President,” said Marciano.

Regarding transportation, he explained that his party had coordinated with the Garuda Indonesia national airline to prepare for departure of the athletes.

“We have discussed this with Garuda Indonesia to either prepare charter flights or provide discounts for the teams to be able to fly to Papua. Everything has been well coordinated,” he said.

Furthermore, regarding the venue for the matches, Marciano underscored that the committee will carry out venue exercises followed by test events.

Regarding the hosting of the matches amid pandemic, Marciano emphasized that the event will follow health protocols similar to those in the 2020 Tokyo Olympics.

The organizers, he added, are also collaborating with related parties such as the health offices and the COVID-19 Handling Task Force, as well as each provincial KONI.

Marciano also expressed hope that the Government’s efforts to handle COVID-19 including the social restrictions policy can bring the pandemic under control so that the event can become a momentum for Indonesia’s awakening.

“We also hope that the COVID-19 situation in the country will get better so that the PON can become the revival of the Indonesian nation from the COVID-19 pandemic,” he remarked. (FID/UN) (EST/EP)