KPU Confirms Report on 7 Containers of Voted Ballots is Hoax 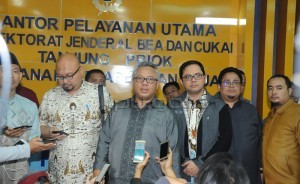 The General Election Commission (KPU) affirmed that a report on 7 containers transported from China, each loading 10 million casted ballots for the presidential candidate pair number 01 Jokowi-Maruf which reported were found by personnel of the Indonesian Navy (TNI AL) Marine Corps is a hoax.

The KPU confirmed that it is hoax. There are no containers that were found by personnel of TNI AL and confiscated by the KPU. All reports are hoax, KPU Chairman Arief Budiman said after visiting  Customs and Excise Office in Tanjung Priok Port with the KPU commissioner and Election Supervisory Board (Bawaslu) leaders, on Wednesday (2/4).

The KPU and Bawaslu had checked the issue to the port and discovered that it is not true. For that reason, Arief called on the police to investigate and find the person who spreaded and recorded the voice note of this hoax, including those who took the screen capture of the hoax and made it a news.

Evil-doer who intended to interfere with elections and delegitimize the organization of election must be arrested, KPU is against those people. We hope the culprit will be arrested immediately, Arief said.

The Chairman of KPU also told mass media to support the election and deliver news according to facts. He asserted that the KPU has so far not printed the ballots because they must undergo several stages first. Therefore, Arief regretted the spreading of hoax on 7 containers of voted ballots.

On the same ocassion, KPU commissioner Hasyim Asyari said that the process of ballots procurement has just begun. Thus, it is certain that the ballots have not been printed.

Two presidential candidate pairs and Central Board of Managers (DPP) of political parties are invited to validate the ballots on Friday (4/1). That means the procurement has not finished yet. Thus, we can ensure you that the KPU has not printed the ballots yet, Hasyim firmly said. (KPU PR Division/ANT/ES)