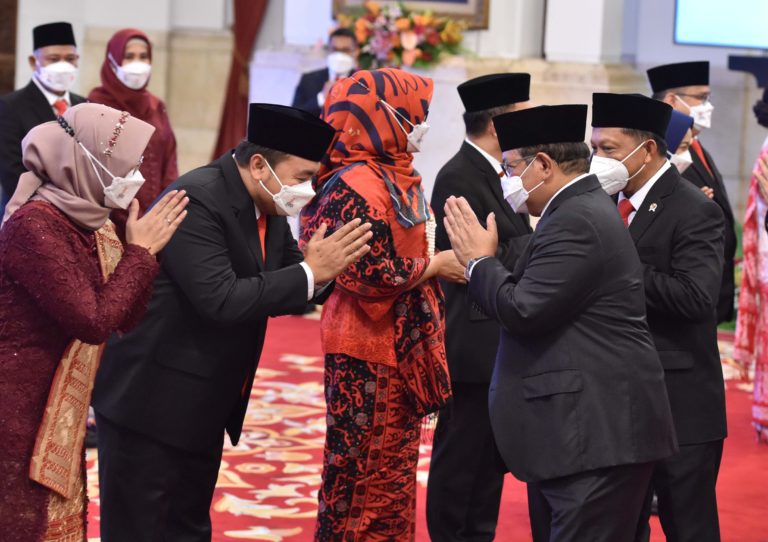 Cabinet Secretary Pramono Anung attends the inauguration of the KPU and Bawaslu Commissioners for the 2022-2027 term of office at the State Palace, Jakarta, Tuesday (04/12). (Photo by: PR of Cabinet Secretariat/Jay)

“We will immediately conduct internal consolidation to learn what has been prepared by the KPU in the previous term of office,” KPU Commissioner Hasyim Asy’ari said, Tuesday (04/12).

Hasyim also pointed out that the KPU and Bawaslu are scheduled to hold a hearing and a working meeting with the House of Representatives (DPR) and the Government on Wednesday (04/13).

Hasyim also asked for support from the public to organize the 2024 general elections and regional elections  in a democratic, transparent, accountable, direct, public, free, confidential, honest and fair manner.

Echoing a similar sentiment, Bawaslu commissioner Rahmat Bagja also expressed readiness to carry out the entire process of overseeing the 2024 elections, while expressing hope that the KPU regulation could be issued immediately.

“After that, we will issue regulations of the General Elections Supervisory Agency in overseeing the entire process of the elections,” Rahmat said, adding that Bawaslu will also learn and evaluate all measures taken by Bawaslu in the previous term of office to make improvements.

Rahmat also asked for support from the Government and the public so that the Bawaslu commissioners could fulfill their mandate in overseeing the general elections. (FID/MAY/AIT/UN) (RI/HD/EP)
Latest News