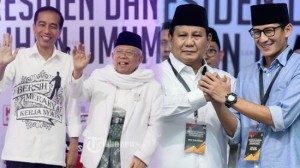 The result of the KPUs plenary meeting has officially declared that the two candidate pairs are eligible as Presidential and Vice President Election candidates in the 2019 Presidential Election, KPU Chairman Arief Budiman said in Jakarta, Thursday (20/9).

According to him, the KPU had conducted a thorough examination of the candidates since the two pairs registered themselves on 10 August 2018, followed by a medical examination few days after.

Following this announcement, Arief expressed hope the public will get detailed information of their presidential and vice presidential candidates.