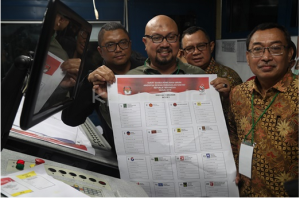 The ballot printing that was carried out simultaneously in three provincesJakarta, East Java, and South Sulawesiare to prove the KPU’s transparency.

It is important for the public to know the information regarding the commencement of this ballot production process to avoid hoaxes, Ilham said, adding that all the ballots are printed in Indonesia.

The production of ballots, Ilham continued, is limited to only 60 days. I think with the capacity of the printing companies, we are optimistic that printing for 60 days can be on target, he added.

PT Gramedia Jakarta is a one printing company of the six consortiums tasked with printing the 2019 Election ballots. From the consortium consisting of 9 companies, the total numbers of ballots printed are 292,019,984 sheets (31.07 percent) and designated for Aceh, North Sumatra, DKI Jakarta, West Java and South Sulawesi Province.

As for the second consortium, PT Aksara Grafika Pratama, the number of ballots produced there reached 68,176,374 sheets (7.25 percent) and designated for Banten and Lampung Provinces. The contract value is Rp36,939,634,064 or 6.12 percent of the total contract value, Ilham added.

For the record, the total number of ballots produced for the 2019 General Election needs reached 939,879,651 sheets.

The DKPP member Alfitra Salam briefly said that his attendance to ensure that the steps carried out by the KPU were in full swing.

We herewith see that the production process has been done properly, Alfitra said. (Humas KPU/ES)