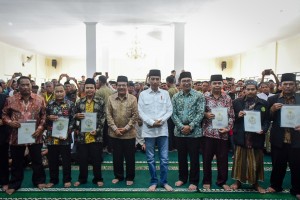 Mosques built on the waqf (religious endowment) land are prone to disputes; therefore, it needs to be certified, President Joko Jokowi Widodo said.

He added that the Government distributes certificates for waqf land, mostly for mosques and musallas (praying room), as measures to avoid the land disputes.

I have heard many cases regarding land disputes over waqf land. Numerous mosques in almost all provinces in Indonesia have similar issues, President Jokowi said in Garut Regency, West Java province, Friday (18/1).

According to the President, to handle the issue, he has ordered Minister of Agrarian and Spatial Planning/Head of the National Land Agency (BPN) to speed up the certification process so that all mosques built on waqf land have rights to land ownership.

For the record, the Government has distributed land certificates not only in West Java province, but also in all provinces across the country. (EN/AGG/ES)