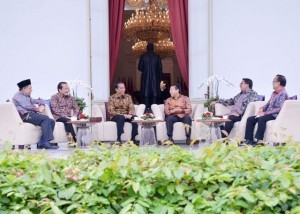 President Jokowi with four leaders of DPR RI on the Palace veranda on Friday (16/12). (Photo: BPMI/Edi)

Four leaders of the House of Representatives of the Republic of Indonesia (DPR RI), namely Speaker of DPR RI Setya Novanto, and Vice Speakers Fadli Zon, Fahri Hamzah, and Taufik Kurniawan had a cordial meeting with President Joko Jokowi Widodo, at the Presidential Palace, Jakarta, on Friday (16/12) noon.

The meeting packed with having tea together, according to Speaker Novanto, discussed a number of national issues, ranging from foreign policy, economic issues to issue regarding the Aceh earthquake disaster that occurred recently.

Speaker Novanto asserted that the House appreciates a number of concrete measures President Joko Widodo has taken in handling the aftermath of the earthquake. “Vice Speaker Fahri has also visited Aceh by chance so that what the President has done can do something real,” Novanto said.

The meeting which lasted for approximately one and a half hours resulted in an agreement that similar meetings can be conducted on a regular basis in the future. “We will always hold a joint consultation between the President and the leaders of DPR RI. We will also tell the faction leaders to jointly discuss the issues with the Government regarding politics in the future,” Novanto explained.

Concluding his statement, Novanto has asserted the Parliament’s commitment to supporting all Government programs in order to improve well-being of the people of Indonesia.

“Most importantly, the Parliament and the Government is for the benefit of people’s welfare,” Novanto firmly said. (BPMI/UN/ES) (MUR/YM/Naster)